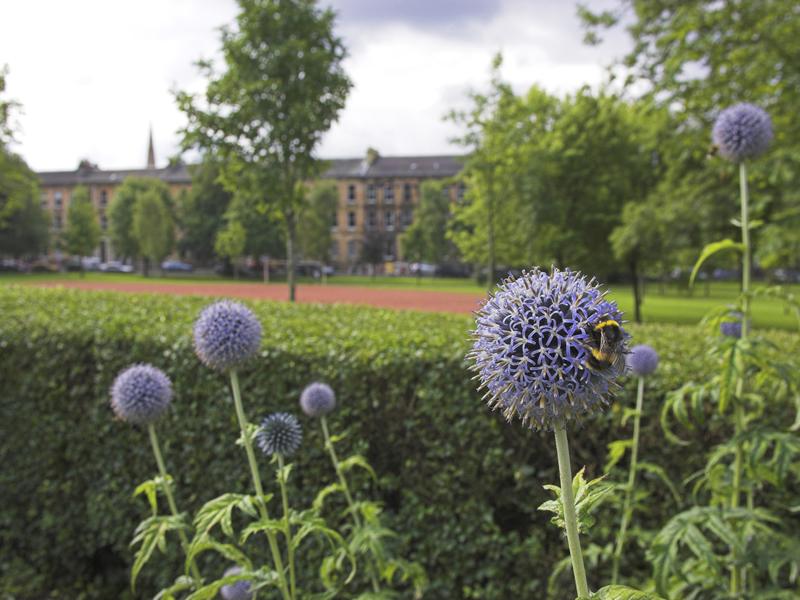 Today sees the launch of RSPB Scotland’s living exhibition that will be completed in the run up to the UN Climate Summit, COP26, taking place in Glasgow 31 October – 12 November.

Glasgow to Globe will feature areas demonstrating the role urban streets, gardens, peatlands, grasslands, seas and coasts and forests can play in tackling the nature and climate emergency. It will highlight how local, national and global actions to protect nature can help solve the climate crisis and protect us from the impacts of climate change, while providing other benefits for people from improving wellbeing to reducing crime.

The exhibition, in the Glasgow Botanic Gardens, will come to life between now and November. Throughout September activities including workshops, which will help to complete sections of the exhibition, will be held before the space opens for visits and public events from mid-October.

Visitors will begin their journey on an urban street that’s been transformed to help climate, nature and people. They will then move on to an area demonstrating activities that people can do at home to be a part of this including bug hotels, green roofs and window boxes before journeying through sections devoted to peatland, grassland, forest and seas. Throughout the finished exhibition visitors will be able to discover how they can take action and what our political leaders need to do as well as links to films to bring the stories of the space to life.

Over the two weeks of United Nations Climate Conference (COP26) hosted by Glasgow in November, representatives from 190 countries will negotiate to agree actions to limit threats to climate. RSPB Scotland is urging everyone not to forget that solving the climate crisis means addressing the nature crisis and urging the Scottish Government to take the opportunity to show the world Scotland’s leadership on the climate and nature emergency.

Anne McCall, Director of RSPB Scotland said: “Climate change is already having a huge impact on Scotland’s iconic wildlife: protecting and restoring nature is also part of the solution and Scotland is in a great position to capitalise on that. From restoring our vast peatlands, to planting native woodlands, to reinstating coastal saltmarsh, to making space in our towns and cities for nature, there are a myriad of ways our Government could invest in nature to tackle climate change while also halting wildlife declines and providing benefits to people from green jobs, making our homes and businesses more resilient and improving wellbeing.

“The Glasgow to Globe exhibition demonstrates how saving nature can both help people and Revive Our World. We hope to inspire people to take individual action and call on our leaders to do the same. All eyes will be on Glasgow during COP26, and the Scottish Government has a chance to show the world what action Scotland is taking. We are urging them not to forget nature.”

Nature in Scotland is in crisis with 1 in 9 species at risk of extinction and only half of its nature healthy and intact; action to help nature can also play a vital role in tackling climate change. Glasgow to Globe features habitats that demonstrate this, including Scotland’s peat bogs which act as a massive carbon sink.

Scotland has the largest expanse of blanket bog in Europe, with peat soils cover 20 per cent of the country, but damaged peatlands emit carbon. The peat bogs in the Flow Country store nearly twice the amount of carbon as woodlands in the UK. However, commercial forestry was planted on the peatland here in the 1980s seriously damaging it.

Glasgow to Globe showcases how RSPB Scotland has been restoring the damaged peatland at the charity’s Forsinard Flows nature reserve by removing these trees and their saplings, and rewetting peatland. Over time it as it recovers it is able to lock in carbon again, and species that rely on it such as golden plovers, dunlins and greenshanks return. So far over 2600ha of damaged peatland have been restored at the nature reserve, with the charity restoring over 9,000 hectares across the country so far.

People can find out more about the Glasgow to Globe events by visiting events.rspb.org.uk/glasgowtoglobe and track the progress between now and November by following @RSPBGlasgow on Twitter and Facebook.