Brewer Innis & Gunn has added two extra sessions to their first ever 'Oktoberfresh' beer festival, due to demand for tickets from beer fans! 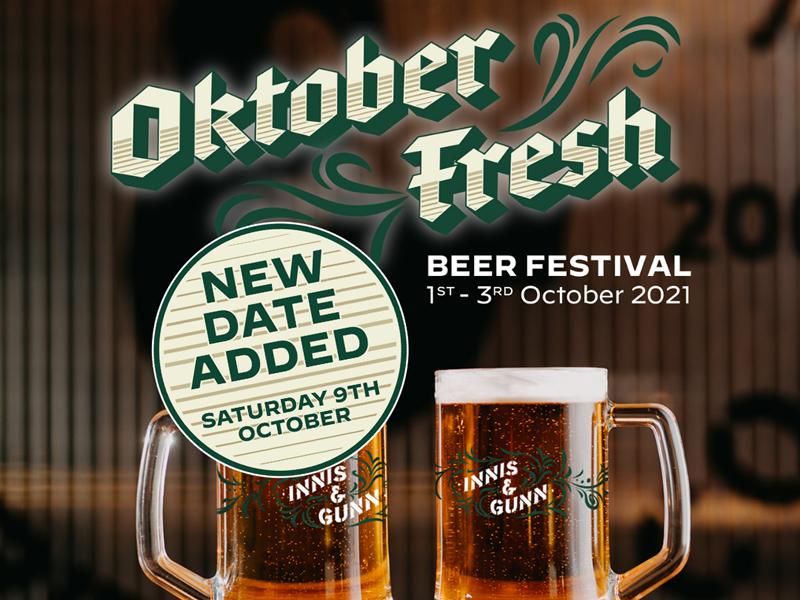 After selling out sessions on Friday 1st and Saturday 2nd October, two further sessions have been added on Saturday 9th October, 1-5pm and 7-11pm. Limited tickets are available for Sunday 3rd October, 2-6pm.

Tickets are on sale via the Innis & Gunn website www.innisandgunn.com/oktoberfresh

Running in partnership with Platform, Oktoberfresh will centre around Innis & Gunn’s Tank Lager, the freshest version of the brewer’s multi-award-winning Lager Beer, named Scotland’s Best Lager at the most recent Scottish Beer Awards.

Innis & Gunn is the biggest supplier of Tank Lager in Scotland, which gets its name as the beer is served from giant tanks which have been delivered straight from the brewery, ensuring the freshest possible pint. Attendees will be able to enjoy steins of Innis & Gunn’s Tank Lager which will be brewed specifically ahead of each session and delivered straight to Platform from the brewery.

In addition to Tank Lager, Innis & Gunn will also be brewing a special limited-edition Lager available to enjoy exclusively at the event, alongside the rest of the brewer’s range.

Musical entertainment will be on offer from live brass band, Brass Gumbo and there will be some hilarious stage games, including a Bavarian Dance Class and a Stein holding competition.

Platform will be fully decorated for the occasion and there will be a dedicated Oktoberfest themed menu, with Currywurst and Vegan Bratwurst platters accompanied with house made sauces and fries.

Tickets cost £12 which includes a one-pint stein of Innis & Gunn Tank Lager and there is the option to book food in advance: www.innisandgunn.com/oktoberfresh

Platform is fully accessible and enjoys a prime city centre location as part of the substructure of Glasgow’s Central Station.