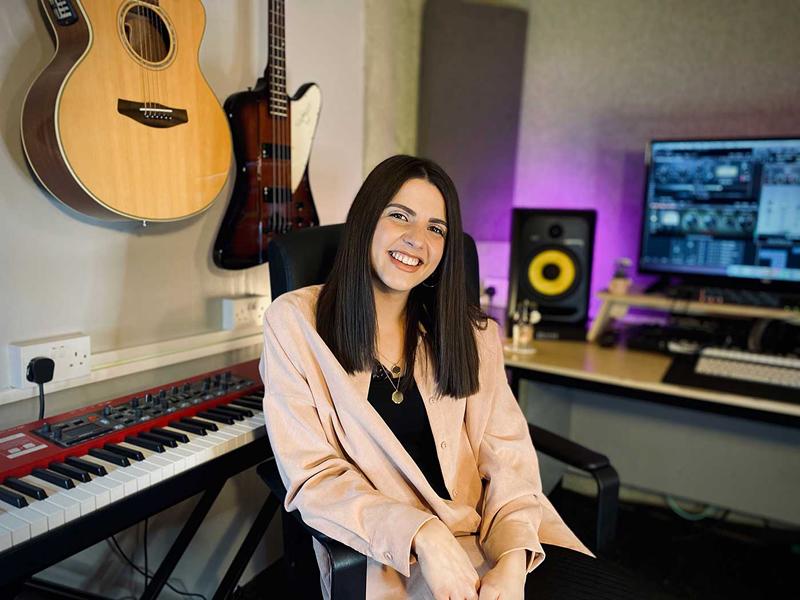 The album, entitled: The New World was released on all major streaming platforms including Bandcamp sypslam.bandcamp.com/album/the-new-world
on Friday 15th October 2021.

The young participants were recorded at the Royal Conservatoire of Scotland and the album was produced, mixed and mastered by Lauren Gilmour, who heads the writing group, at Novasound. Subjects covered in the young writers’ poems include - what it means to be a girl and have a fear of walking the streets; what the future holds; climate change and loneliness during lockdown.

The young people are part of the Scottish Youth Poetry Slam Digital Writing Group a year-long project which was set up in December 2020 to connect young people from across the country. The group was set up to help the young writers develop their skills, build their confidence and be part of a community of new talent. Poets, speakers and industry professionals including Holly McNish, Hannah Lavery, Nadine Aisha Jassat, Tawona Earnes, amongst others, have been involved in the delivery of the project.

Kathleen Jamie, Scottish Makar, has lent her support to the project and commented: “I began writing poetry in my teens and published a first booklet at the age of 20. Since then, writing has remained the touchstone of my life. It’s where I do my best thinking, and where I rub up against the world. It is wonderful to know that these young people have discovered the transformative power of poetry and spoken word too. Their voices are so important, and I know they have found a friend for life.”

The album documents and celebrates the young people who have been part of the group this year with a collective and community spirit. There are nine participants, all mid-teens, mostly from central belt, with a member dialling in from India. The writing groups are free of charge and held each month.

Some of the young people taking part had this to say:

Shreemayi Kurup, aged 13, from Delhi in India, who wrote ‘These Vicious Streets’, said: “My piece was inspired by the simple feeling of being out in the streets as a girl. It is such a simple thing going out in the open, yet for me, the feeling is not carefree or calm, it's horrifying. I thought if the world knew about it, they'd think of rewiring what is engraved in them.”

Rhys Pearce, aged 17, from Hawick in the Scottish Borders, who wrote ‘Letter to Our Cousins in the New World’, said: “I think the concept for this began when we looked at epistolary poems and discussed the idea of talking to future generations. Since the poem only comes from one perspective, it becomes a one-sided conversation that develops more into a voicing of our present concerns than a real attempt to describe the future. The speaker of the poem doesn’t know what the future will be like, and partially that makes them nervous because there’s no assurance against any of the terrifying things that are happening right now. On the other hand, this means the future becomes a blank slate that the speaker can project their hopes onto and use to imagine a better world. I think I was very keen to present that both of these ideas can exist in unison – yes, the future is scary but it’s also all we have, and we need to not only hope that things will get better but actually do something to make sure that they will because we can’t just assume that progress will happen.”

Frea Tennant, aged 18, from Glasgow, who wrote ‘No More’ said: “The song reflects the carelessness we as a population have shown to the world. The earth is suffering, and we need to adapt our behaviours in order to replenish it.”

Elsie Hannay, aged 14, from East Kilbride, who wrote ‘The Meadow’, said: “My poem is about the fear of loneliness people must of us felt during lockdown.”

Tawona Sithole, a writer, performer, musician and academic, who delivered a session to the group last month, said: “The pandemic has put pressure on our physical and mental health equally. For young people especially, our most active group in society, this has been particularly hard. The online creative space has been a reimagination of our ways of gathering, but more importantly a signal that we're still here, and we are not in isolation.”

Lauren Gilmour, Head of SYPS Digital Writing Group, commented: “Running this project has been a much-needed creative constant in such turbulent times. I’ve been blown away by the commitment, talent, and honesty of our young writers. It’s been a huge privilege to see and hear them develop as writers, performers and as people in the process. This group represents the voices we need to hear more of in our future. On an artistic and a personal level, this project has inspired me to keep sharing stories and listening intently to the stories of others.”

If you would like to take part in the Digital Writing Group, contact: Lauren Gilmour, lauren@confab.org.uk or telephone: 07803 550 430