Tattoo studio, Black Abbey Glasgow, is hosting their first ever charity Flash Day, donating 100% of profits to loneliness and animal charity, Give a Dog a Bone! 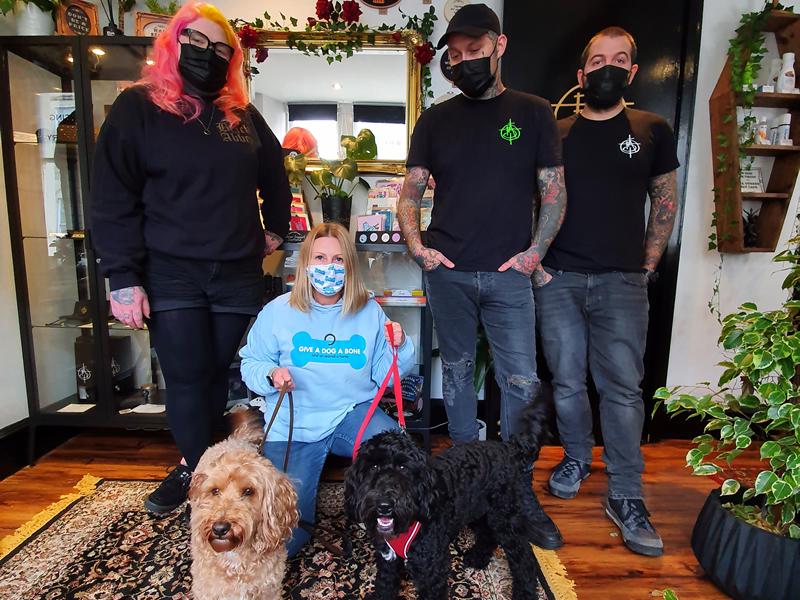 Glasgow-based tattoo studio, Black Abbey Glasgow, is hosting its first ever charity Flash Day on Saturday 13 November to raise awareness of and fundraise for local loneliness and animal charity, Give a Dog a Bone... and an animal a home. All proceeds from paying customers at the sold out event will be donated to the charity, which holds a special place in the hearts of the tattoo team.

Give a Dog a Bone, a charity tackling loneliness for older adults and animal homelessness by helping people over 60 afford a rescue pet companion, were touched to find out the team at Black Abbey had selected them to receive 100% of their profits from the Flash Day.

While the Flash Day is sold out, the team of tattoo artists is selling specially designed prints in the Black Abbey online shop alongside running a lucky dip up until the day to extend the opportunity to the wider public who want to donate. Alternatively, the public can donate directly to Give a Dog a Bone through the donate button at giveadogabone.net

Louise Russell, Give a Dog a Bone, Charity Founder, said: “It’s so touching that the team at Black Abbey have chosen to support our charity through this event. We work hard to provide financial support to help people over 60 adopt a rescue pet companion, or to feed and care for their pet on an ongoing monthly basis. Pets can provide routine and friendship in their lives, and the animal can have a loving home.”

The Black Abbey Glasgow team intentionally chose Give a Dog a Bone after the charity kindly provided help and advice to one of their team members when they needed support to rehome a dog in 2017.

Fiona Thomson, Tattoo Artist, Black Abbey Glasgow, said: “We chose Give a Dog a Bone... and an animal a home because Louise had helped our staff members previously and gave us great advice and support. And we just love the whole idea of the charity itself.”

It’s not just financial support the charity provides older adults to help them adopt a rescue pet, or care for their animal companion on an ongoing basis. The charity also delivers an evolving programme of group activities, free for people over 60, at its Community Space in the Shawlands, one of three Community Spaces the charity has in Scotland.