The Burrell Collection, Glasgow is the first public collection in the UK to acquire a sculpture by Camille Claudel

L'Implorante, a touching, powerful and rare example of Claudel at her most vulnerable, is the museum's first acquisition in ten years and the first sculpture by a woman in The Collection. 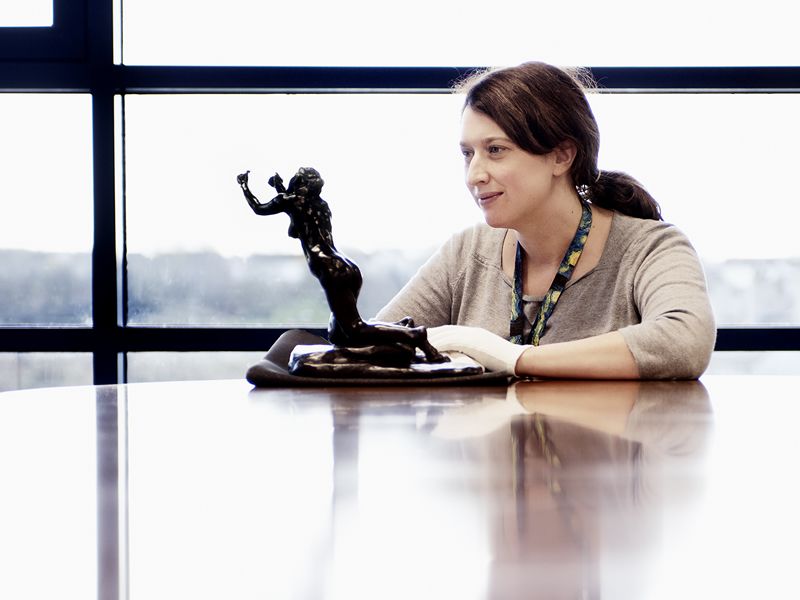 The museum, which houses one of the greatest global art collections ever amassed by one person, will reopen in March 2022, following a major building upgrade and ambitious redisplay.

Glasgow Life, the charity which operates The Burrell Collection, was able to purchase this stunning example of expressive sculpture by a key female artist, with support from the Burrell Trustees, National Fund for Acquisitions, Art Fund and Henry Moore Foundation. Camille Claudel was a contemporary and close collaborator of Auguste Rodin (1840-1917), whose work is synonymous with the museum.

L’Implorante will initially be displayed as an exciting part of the inaugural exhibition in the newly designed Special Exhibition and Event space in the Burrell Collection. The free exhibition, due to open late summer 2022, will explore the legacy of Sir William Burrell as a man and collector and his motivations to establish an internationally renowned museum for the people of Glasgow and beyond.

Professor Frances Fowle, Senior Trustee, Sir William Burrell Trust, said: We are delighted to acquire this profoundly moving bronze by Camille Claudel for the Burrell Collection. This outstanding artist, although underrepresented in this country, was an important role model for women sculptors at the turn of the twentieth century. The sculpture will perfectly complement the museum’s important holding of works by Auguste Rodin, with whom Claudel's career was so closely aligned.”

Claudel showed an early talent for sculpting, her childhood creations, for which her siblings posed, were fired in the oven by the family cook. She became a sculptor at a time when it was very difficult for women to do so. The École des Beaux-Arts in Paris, where artists would usually attend to become a sculptor, did not accept women at the time. Undeterred, Claudel studied at the nearby Académie Colarossi.

The blossoming artist was introduced to Auguste Rodin when she was 17 years old. Two years later she began working in his studio. Soon, Claudel and Rodin became lovers, and their lives, as well as their work, became inextricably linked.

L’Implorante was created around the same time her relationship with Rodin was coming to an end, and he returned to his long-term partner, Rose Beuret. It shows a naked, young woman kneeling on rocky ground, reaching forward with both arms, as if attempting to grasp something or holding something invisible. Her face has a child-like expression, her lips are parted as if she is about to say something, and her eyebrows are furrowed, expressing sadness.

The kneeling figure was first modelled as part of a larger, three-figure group, L’Âge Mûr (Maturity) in 1895-98, which depicts a middle-aged man being led away from the youthful figure shown in L’Implorante. This group sculpture is commonly acknowledged to depict a regretful Rodin being stolen away from the young Claudel by an aged Beuret.

The reproduction rights for L’Implorante were acquired from Claudel by the publicist and editor Eugène Blot (1857-1938) around 1907. He arranged for the sculpture to be cast in two sizes: 72cm and 28.2cm. It is believed only 5 of the larger size were produced, plus around 59 of the smaller versions. Today four of these are held in the collections of the Musée Rodin in France, Albert-Andre Museum in France, Fondation Pierre Gianadda in Switzerland and the Metropolitan Museum of Art in New York.

The Burrell Collection’s European bronze sculptures centre around 14 works by Auguste Rodin, a grouping second only in size to the V&A in the UK. This includes the well-known and much-loved sculpture The Thinker (1880-1). The collection also contains bronze sculptures by European contemporaries including Bastien-Lepage (1848-1884), Meunier (1831-1905), Barye (1795-1875) and Epstein (1880-1959).

Sir William Burrell did not buy a work by Camille Claudel. At the time he was actively collecting it is unlikely there would have been an opportunity to buy her work, because Claudel would not have been considered an important artist. Although not obvious at the time Burrell purchased a work with very close connections to Claudel. The Rodin sculpture Brother and Sister borrows directly from a pre-existing work by Camille Claudel. It is sometimes even regarded as a collaboration between the two artists. This will also be on show when the refurbished museum reopens in March 2022.

Councillor David McDonald, Chair of Glasgow Life, said: “We are elated to acquire this piece by Camille Claudel and indebted to the Burrell Trustees, National Fund for Acquisitions, Art Fund, Henry Moore Foundation for their support in helping us secure this internationally important sculpture for The Burrell Collection.

“Glasgow Life is proud to actively collect work by women artists and announcing acquisitions is a source of huge excitement, especially when it is the first of its kind in the UK. Until now Glasgow did not have a sculpture by Claudel. This piece bolsters the collection and connects well with other works that will be on show, most notably by Rodin.

“We are certain it will be a draw for visitors, and it demonstrates the Burrell is not a static collection, but one that embraces change and responds to the world around it.”

Dr Hazel Williamson, National Fund for Acquisitions Manager, said: “We’re particularly pleased that NFA support will allow Claudel’s powerful sculpture to take its place alongside work by Rodin when The Burrell Collection opens next year, bringing the work of this uniquely talented artist to new audiences.”

Jenny Waldman, Director Art Fund, added: “Camille Claudel was an exceptional talent and Art Fund is delighted to support the acquisition of this expressive and powerful work. Her sculpture, L’Implorante, is the first work by Claudel to enter a UK collection. The sculpture will be enjoyed by visitors to the Burrell collection once it reopens in March 2022, featuring centre stage in its opening exhibition.”

Godfrey Worsdale OBE, Director, Henry Moore Foundation, said: “We are delighted to support the acquisition of Camille Claudel's L’Implorante at The Burrell Collection, an exciting and significant addition to this exceptional collection.”

The Burrell Collection is due to reopen in March 2022, for more information visit www.burrellcollection.com