OVO Hydro is a Greener Arena

Glasgow's OVO Hydro is the first arena in the world to achieve a Greener Arena (AGA) certification to sustainability! 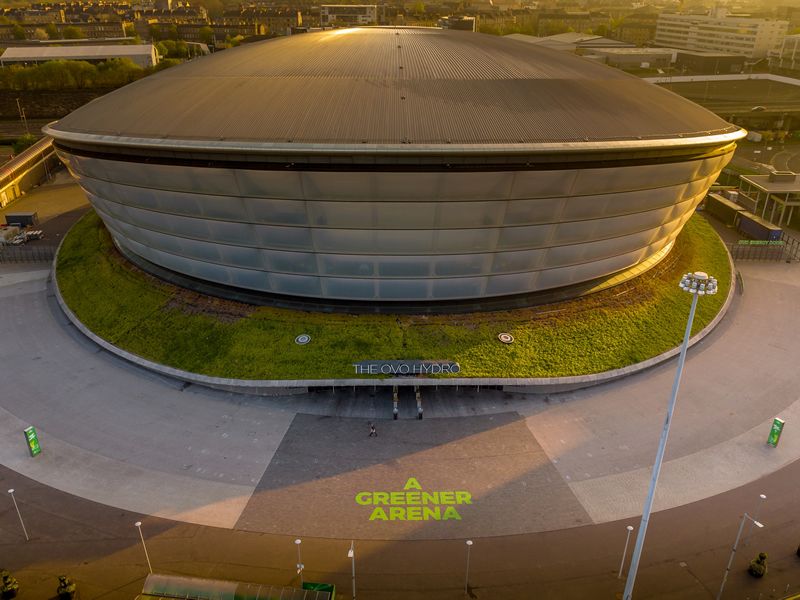 AGA takes a holistic approach to sustainability, not only looking at emissions and environmental impacts but also people, inclusion and wellbeing.
The award was officially presented to the OVO Hydro at today’s Green Events and Innovations Conference, part of the wider International Live Music Conference (ILMC) being held in London.

AGA is awarded by A Greener Festival (AGF), a not-for-profit company committed to helping events, festivals and venues around the world including Glastonbury, Primavera Sound and Roskilde Festival, to reduce their environmental impact. AGF are pioneers in the event sustainability sector providing independent certification, training and expertise in helping facilitate best practice for over 15 years.

Assessors highlighted the OVO Hydro’s commitment to reducing emissions, enhancing local biodiversity, and being an instrument of positive change on the arena tour circuit. They praised the venue’s use of 100% renewable electricity, elimination of single use plastic cups at live events saving 2m cups per year, campus wide sustainable food strategy and expansion plans for electric vehicle charging points. The “outstanding” programme for inclusion, health and wellbeing for staff through the dedicated people department was also highlighted.

Title partner OVO Energy supported the venue’s goal to achieve ‘Greener Arena Certification’ through funding of specific carbon-reduction and environmental initiatives. As part of the assessment, AGF will also share actionable recommendations with the OVO Hydro team that are designed to further evolve the venue’s ongoing certification assessments in years to come.

Debbie McWilliams, Director of Live Entertainment at SEC, said: “More than ever we are focused on the impact our business has on the planet and are proud to be awarded A Greener Arena certification. Receiving such an accolade is further proof of our commitment to delivering a greener future for our events. Being the first arena in the world to accomplish this is a huge achievement and we hope this paves the way for others to follow. It is a significant milestone on our journey towards net zero by 2030, and a real credit to the team who work so passionately on implementing our sustainability strategy.”

James Watts, Head of PR & Sponsorships, OVO Energy said: “We’re proud to work with partners who support our commitment to drive progress to zero carbon living. By becoming the world’s first arena to achieve the ‘A Greener Arena’ certification the OVO Hydro is sending a clear signal to the industry that lower-impact live events are possible. We will continue to support the OVO Hydro to further reduce its carbon footprint, so fans and artists alike can perform in a venue that’s supporting our collective goal; saving the planet.”

As the first arena in the world to achieve the certification, the team at AGF also view today’s announcement as a milestone and catalyst for ongoing industry-wide progress and change.

Claire O’Neill, Co-Founder of AGF said: “A Greener Festival was launched in 2007 and since then we’ve assessed over 1000 events, tours and venues across 5 continents, providing the first and only sustainable event certification including on site assessment of practical implementation and independent verification across 11 categories of event analysis, and the first dedicated arena certification. We’re delighted for the team at the OVO Hydro, and we hope that this leads the way for more arenas to get involved in the process.”

The milestone supports The SEC’s overall sustainability ambitions and adds to the significant moves it has already made towards reducing its carbon footprint and achieving net zero by 2030. Alongside 100% renewable electricity and elimination of single use plastic cups at live events, the campus has implemented a sustainable food strategy where a minimum of 80% of all ingredients are sourced in Scotland as well as reducing food waste to below 1%. The strategy combines working with staff, organisers, partners and visitors to support the net zero journey.