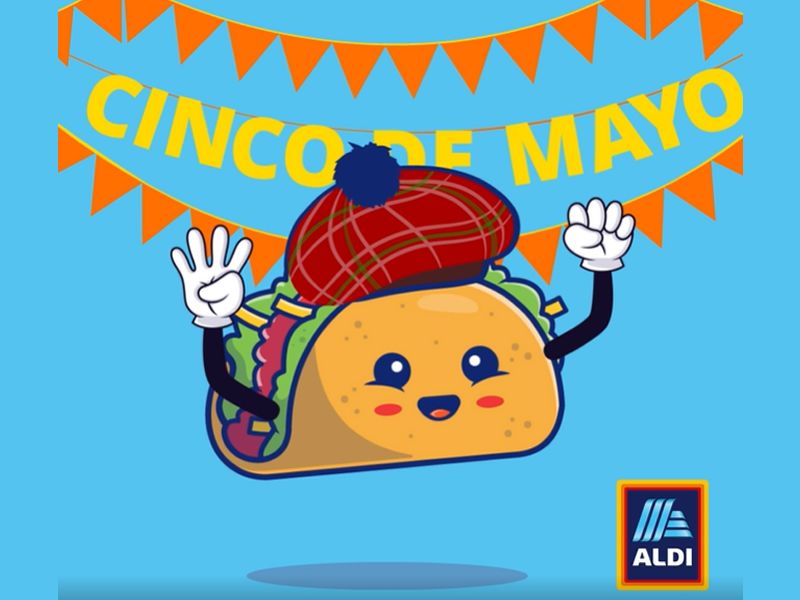 Proving again that Scots have the innate skill to make anything Scottish, this take on the tex-mex classic, is best washed down with Aldi’s fabulous range of craft beers, with the whole meal for four coming in for under £10, you can impress, or test, your friends with the perfect Scot-Mex mix to celebrate the traditional Mexican holiday.

Haggis Fajitas
There’s no need to break the bank for Aldi’s take on the fuss-free family favourite – Macaulays Haggis feeds up to four (£1.59) and is good enough to shake your maracas at. Its delicate spice and deep flavour means no seasoning is needed, so you can get straight down to cooking your haggis as per packet instructions.

While your haggis cooks, you can prep some extra fillings for people to bulk out their fiesta feast. Keep everyone happy with the classics, including lettuce (46p), tomato (48p), and onion (63p), and add that nod to the dish’s heritage by putting a couple of sliced chillies into Aldi’s Snackrite salsa (£0.69, 300g).

Grated Glen Lochy Scottish Mature Cheddar (£1.89) can be used to balance out the heat – and before you ask, yes, cheese does go with haggis.

Grab some Deli guac (£0.79) and Snackrite sour cream (£0.69, 300g) for the fajita purists and place a bowl of Snackrite tortillas chips (£0.69) on the side for people to pick at, which is guaranteed to please even the fussiest of eaters.

With the weekend now upon us, adventurous customers can also pick up a host of delicious beers to compliment this spicy taste sensation including Pretty Juicy DIPA (£1.99, 440ml) or deliciously fruity Tropical Pale Ale (1.79, 440ml) both supplied by Scottish Brewery of the Year, Fierce Beer.

You can find your nearest Aldi here >>