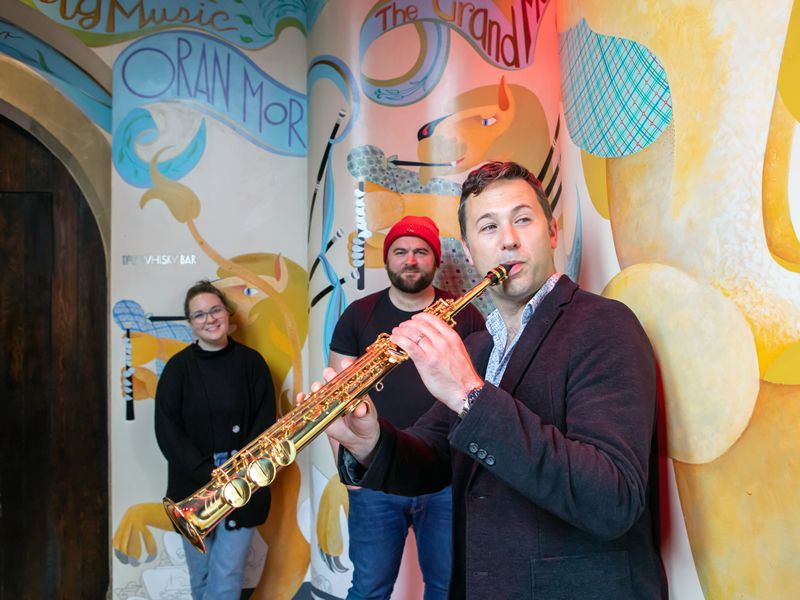 With locations across Glasgow set to burst with jazz talent this June, the four-day festival will take place between Thursday 16th - Sunday 19th June 2022.

Jazz will be the sound of the city this summer with over 24 events across the four days. There will be performances from some of the biggest names in jazz, blues, soul, funk, R&B and world music taking place across the city’s stages.

Due to the pandemic and accompanying Covid-19 restrictions, the festivals in 2020 & 2021 were adapted to digital offerings, therefore this will be the first time the event has taken place with in-person audiences since 2019.

Legendary American jazz bassist Buster Williams will play St Luke’s with his all-star quartet, including iconic jazz funk drummer Lenny White, on the closing night of the festival. Perhaps best known as one of the first members of pianist Herbie Hancock’s early 1970s group, Williams has also been the accompanist of choice for many singers, including Nancy Wilson who he toured extensively with throughout his career. Williams has worked on several film soundtracks and television commercials - including adverts for Coca-Cola, Budweiser and Old Spice.

Glasgow Jazz Festival is delighted to welcome back award-winning jazz trumpet player Ryan Quigley to its stage. Ryan, who has recorded and toured with the likes of Quincy Jones, George Michael, Gregory Porter, Michael Bublé and Robbie Williams, will play Óran Mòr with his big band on Friday 17th June.

Across the city, leading jazz vocalist Georgia Cécile will headline St Luke’s. Having toured as the main support for Gregory Porter, the young singer-songwriter is undoubtedly at the helm of the new wave of UK jazz-pop crossover artists. Her music has a timeless and cinematic quality that fuses jazz and soul influences with a contemporary edge - a sound that is sure to come into its own surrounded by the special acoustics of the East End venue.

Ebi Soda take to the Blue Arrow stage on the opening night, thriving on the idea of contradiction the five-piece keep a post-punk DIY ethic close to their hearts with erratic drum breaks, multi-effect soundscapes and searing trombone lines.
Multi award-winning saxophonist and composer Binker Golding will perform a mixture of jazz, blues and Americana at the Blue Arrow on Saturday 18th June. Alongside his quintet he will showcase the talent that has had him crowned Instrumentalist of the Year by Jazz FM in 2020.

Sunday at the Blue Arrow will welcome ‘Best Jazz Vocalist’ at the British Jazz Awards alumni Anita Wardell and her trio. Anita is regarded as an outstanding scat singer, and she is also recognised as a skilled writer and performer of vocalese.

UK-based Latin Jazz outfit TRYPL will showcase their original and fresh sound on the opening night. Created by the horn section, Trevor Mires, Ryan Quigley and Paul Booth, the brass section is sure to take centre stage for this performance, but they will also be joined by powerhouses Alex Wilson (piano), Dimitris Christopoulos (bass), Edwin Sanz (percussion), Tristan Banks (drums) and Davide Giovannini (drums). TRYPL will play Drygate on the opening night on a double bill with saxophonist Paul Towndrow and his trio.

Home-grown talent will once again take centre stage at this year’s Glasgow Jazz Festival seeing award-winning Scottish pianist Fergus McCreadie play solo piano at the Recital Room in Glasgow City Halls in a double bill with Scottish Jazz legend Brian Kellock, who will perform an intimate and beautiful solo piano recital to mark the opening night of the festival.

A special all-day event, curated by the acclaimed Glasgow DJ Rebecca Vasmant, will take place at Óran Mòr on the final day. Entitled "With Love, from Glasgow", this unique event will be a festival within a festival and will feature Paix, Azamiah, Blue Boar Brass, Mama Terra and Era Suite. There will also be DJ sets from Nick Peacock, Chris Astrojazz and Rebecca Vasmant.

Jill Rodger, Director of Glasgow Jazz Festival, said: “It will be so special to be back this year with a fully in-person festival. I can’t wait to welcome some exciting new acts alongside some familiar faces back to the Glasgow Jazz Festival stage. We’ve put a real focus this year on homegrown talent as the last two years have been so difficult for so many musicians and we wanted to make sure we were supporting them as much as we can with this year’s line-up. It’s shaping up to be a fantastic festival and will be a brilliant opportunity for people to discover the high calibre of jazz talent we have here on our doorstep in Scotland.”

The festival continues to champion female jazz talent and they have taken a pledge to the Keychange initiative to achieve a 50:50 gender balance at the festival each year. This year 65% of performances at Glasgow Jazz Festival will showcase the incredible female talent within the scene.

Alan Morrison, Head of Music, Creative Scotland said: “Ever since it helped to make Glasgow a European Capital of Culture, Glasgow Jazz Festival has played a crucial role in the musical life of this city and its thriving jazz scene. The revival of live programming secures the festival’s place as an event which celebrates jazz in all its forms, and the line-up of homegrown talent in concert with artists from around the world gives jazz a starring role in Glasgow’s cultural life this summer.”

The festival takes place thanks to National Lottery funding from Creative Scotland.

For more information and to buy tickets for the festival please visit www.jazzfest.co.uk. Tickets go on sale at 4pm on Tuesday, 10 May 2022.