Celebrated Dali painting to go on display at The Auckland Project, on loan from Glasgow Life Museums

Dalí's painting, on loan from Glasgow Life Museums, will be displayed alongside El Greco's Christ on the Cross, uniting two Spanish masterpieces. 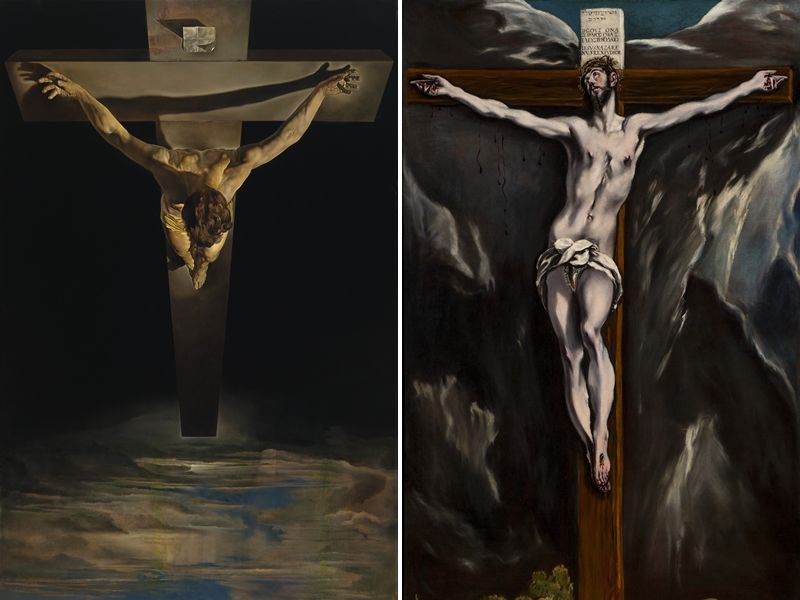 From Saturday 9 July to 4 December 2022, The Auckland Project will unite two Spanish masterpieces from British collections at the Spanish Gallery.

Acquired by Glasgow city in 1952 directly from the artist, Salvador Dalí’s Christ of St John of the Cross is one of the most celebrated and reproduced paintings of the 20th century. It will be exhibited alongside El Greco’s Christ on the Cross, which went on public display for the first time after more than two centuries in a private collection when the Spanish Gallery opened last year.

Separated by nearly 350 years, both artists were radical and innovative in their own time - El Greco with his deeply expressive use of exaggerated form and colour, and Dalí with his dream-like compositions rendered in lucid detail. Both works convey landscapes based on places the artists lived and worked, from the greenery of Toledo to the coastal backdrop of Portlligat. However that is where the similarities end, with each artist offering deeply contrasting perspectives on the theme.

El Greco depicts Christ as a real, living man - the vivid blood and pallid face, the use of exaggerated form, and the dramatic contrasts of light speak to an experience of anguish. His painting forces the viewer to come face to face with Christ’s suffering. Dalí in contrast presents a beautiful but anonymous figure viewed from on high, emphasising his role as the Son of God and the magnitude of the sacrifice witnessed. Dalí said: “I want to paint a Christ that is a painting with more beauty and joy than has ever been painted before.”

Dalí / El Greco will be the first temporary exhibition in The Spanish Gallery, the first gallery in the UK dedicated to the art, history and culture of the Spanish Golden Age. The Gallery, which focuses on art of the 16th and 17th centuries, explores the universal themes of the transience of life and its battle with the desire for eternity. The Gallery complements and contextualises the Spanish masterpieces by Francisco de Zurbarán held in next door Auckland Castle for over 250 years.

Dalí’s Christ of St John of the Cross was last loaned to a UK institution in 2017, visiting London's Royal Academy. It has never been on display in the North East before. Former director of Glasgow Museums Dr. Tom Honeyman, who acquired the work on behalf of the city of Glasgow, expressed Dalí’s eagerness to loan the work as widely as possible, aligning with the Spanish Gallery's mission to make extraordinary examples of Spanish art available to the British public. Honeyman said: “If I were ever asked what I would do with the Dalí, I think I would reply on these lines: Put it into circulation as much and as frequently as possible.”

The exhibition invites visitors to consider their own response to the work of two important and influential artists and will be accompanied by an exhibition guide containing three short reflections, including one by the Bishop of Durham, the Right Reverend Paul Butler.

Jonathan Ruffer, Founder of The Auckland Project, said: “It’s curiously hard to say thank you properly for something so wonderfully generous that mere words of thanks really are not enough.
Our Spanish Gallery has several examples of 'Christ on the Cross' painted some 400 years ago, including our example by master of the Golden Age El Greco. The generous loan of Dalí’s iconic ‘Christ of St John on the Cross’ gives an opportunity for putting the same image from today’s world with that of the past and ask the question - are they really paintings of the same thing?”

Duncan Dornan, Glasgow Life’s Head of Museums and Collections, said: “This summer, the renowned Christ of St John of the Cross will be shown alongside another Spanish masterpiece by El Greco at The Spanish Gallery in Bishop Auckland. Displaying this treasured painting in a new way enables us to widen our understanding of the incredible artist, Salvador Dalí who painted this iconic artwork, which remains a favourite with Glaswegians and visitors to the city. It will go back on show at Kelvingrove early in 2023. Glasgow’s art collection is considered one of the finest in Europe and loaning key pieces allows people across the country to access and enjoy them, bolstering our reputation. These partnerships also allow visitors to Glasgow Life Museums to enjoy beautiful artworks from other important collections.”

Find out more at www.aucklandproject.org