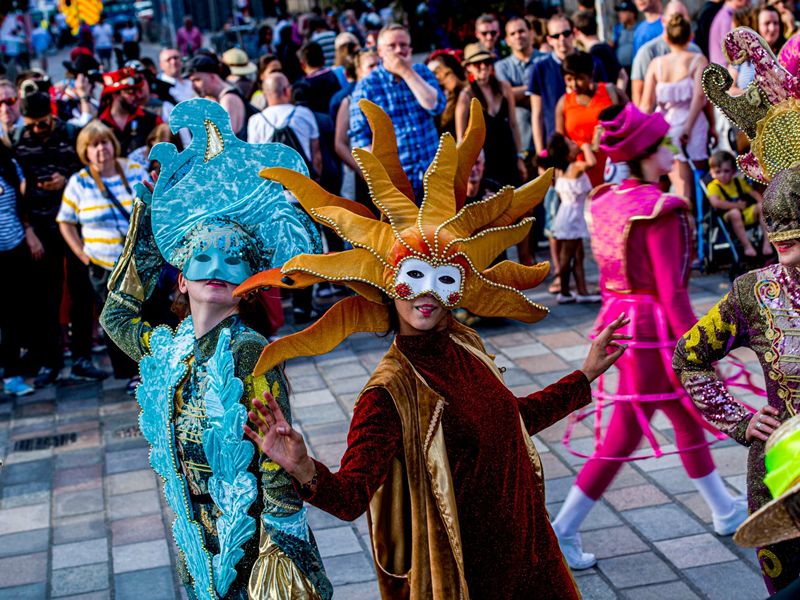 Merchant City Festival has launched its programme for this year’s exciting long weekend of entertainment.

Taking place from Thursday 28th to Sunday 31st July 2022, this much-loved festival will showcase outdoor arts, circus, dance and more – with events happening in and around the streets and venues of the Merchant City area of Glasgow. It is delivered by Glasgow Life, the charity that inspires people to lead richer and more active lives through culture and sport.

Aside from the show-stopping programme of entertainment taking place across the four days, the ever-popular Merchant City Festival markets are back for the first time since 2019, offering a craft and makers market and some food stalls. The iconic Merchant City Craft Fair, the oldest in the city, will make its way outdoors especially for this year’s festival.

The Carnival Party will kick the festival off in style on Thursday 28 July from 4pm-8pm, with dancers and musical performances. This incredible spectacle, where Baroque meets Hip Hop, is the culmination of a three-month community outreach programme that has worked with a host of dance and community groups across the city.

Exhilarating sing-along and dance-along screenings, which are being run by Dance HQ, will take place in the iconic Grand Hall in Glasgow’s City Halls each day of the festival. Children’s favourite Encanto will be shown on Thursday 28 July and Sunday 31 July, with Sing 2 being shown on Friday 29 July and a screening of Trolls being shown on Saturday 30 July. Children can expect a small gift on arrival and dressing up is encouraged.

Aside from the big sing-along, there will also be family discos and family cèilidhs for the whole family to enjoy across the weekend.

On opening night, Glaswegian comedy act, Big Angie will make her live comedy debut, with a feisty show all about men, Botox, big lips, and the law. From her youth spent in Glasgow’s East End to her tales of growing up, this show will be full of confessions you don’t want to miss.

There will also be music taking place in Merchant Square each night of the festival, with entertainment from a DJ, a tribute act, a jazz piano recital, a vocalist group, and a family cèilidh.

On Friday 29 July, the festival will have a strong family focus, with a full programme in Merchant Square in partnership with the Edinburgh International Children’s Festival.

This will include The Happiness Collectors; an audio-immersive and interactive live performance ideal for children aged 5-10 and their families. Each audience member will be provided with their own set of wireless headphones so they can join in on a journey of sounds and silliness to learn the best ways to collect happiness – and most important of all, how to pass it on.

Walkabout in Merchant City will have amazing acts around Merchant Square and the surrounding streets on the Friday as part of the family day, with the likes of Kate E. Deeming, Glasgow’s resident dancing queen, leading the grooves as the Boogie Unicorn when she brings her fun, interactive, feel-good dance session for all ages to the festival.

The UNBOSI Marble Awareness Roadshow, runs in George Square from Friday to Sunday. This giant marble run installation will include interactive marble run making and giant marble run machines. UNBOSI will be attempting a Guinness World Record on Sunday 31 July, with super-charged marbles.

Friday night will see the Hip Replacement Club Night return to the festival when it takes over the Old Fruitmarket. Since 2010, Hip Replacement has been filling the disco void with four and a half hours of top tunes at their monthly club. Revelers can dance themselves dizzy and everyone is guaranteed disco fun on a grand scale.

The festival will also welcome two of the most exciting outdoor arts companies to the city for their Scottish premieres. Joli Vyann bring their breathtaking acro-dance show Timeless to George square across the weekend, when four dancers interact with a monumental rotating hourglass to explore the themes of time and climate change. Leading Choreographer Jeanefer Jean Charles will also bring Black Victorians to the festival, a powerful dance piece based on recently discovered photo portraits of people of colour in the UK from the nineteenth century.

Meanwhile on Saturday and Sunday, Hurricane Group (FISE) will present BMX Freestyle Flatland demonstrations live in George Square. The riders will perform a dynamic combination of art, sport and acrobatics to the backdrop of a live DJ and MC. Watch as some of the top riders in Europe showcase technical tricks and stunts. The athletes will host free BMX Freestyle clinics across the weekend giving spectators a unique chance to get involved. In the summer of 2023 BMX will be returning to Glasgow as part of the 2023 UCI Cycling World Championships when the best riders in the world will compete at Kelvingrove Park as part of the Urban World Championships.

And a special performance from Scotland-based Jamaican singer-songwriter iBrina and her world-class ensemble of musical friends will take place on the Saturday and Sunday night at City Halls. Originally scheduled as part of Celtic Connections 2022, these two nights of entertainment will celebrate the rich cultural tapestry of modern Scotland, through stories of migration, displacement, joy, and humanity. These performances are supported by EventScotland as part of Scotland's Year of Stories 2022.

Councillor Eva Bolander, Chair of the Merchant City Festival Committee, said: “This year’s programme spotlights emerging and established talent as the streets once again come to life with a vibrant and diverse mix of music, outdoor theatre, cabaret, circus, dance, and carnival. It’s a fantastic line-up of events and I would encourage everyone to come along and join the celebrations.”

Bailie Annette Christie, Chair of Glasgow Life, said: “The Merchant City Festival is always a showstopper in Glasgow’s summer events programme. The familiar streets and businesses in the city’s renowned cultural quarter are transformed into a thriving arts space filled with wonderful entertainment for every kind of audience. This year’s programme offers the opportunity to enjoy outstanding performances and family events, explore food and crafts or simply soak up the music and joyful atmosphere in one of the many local restaurants and cafes. As always, the Merchant City Festival promises to be unmissable for local people and visitors alike.”

Most events will be free to attend. For ticketing information and the full programme, visit merchantcityfestival.com