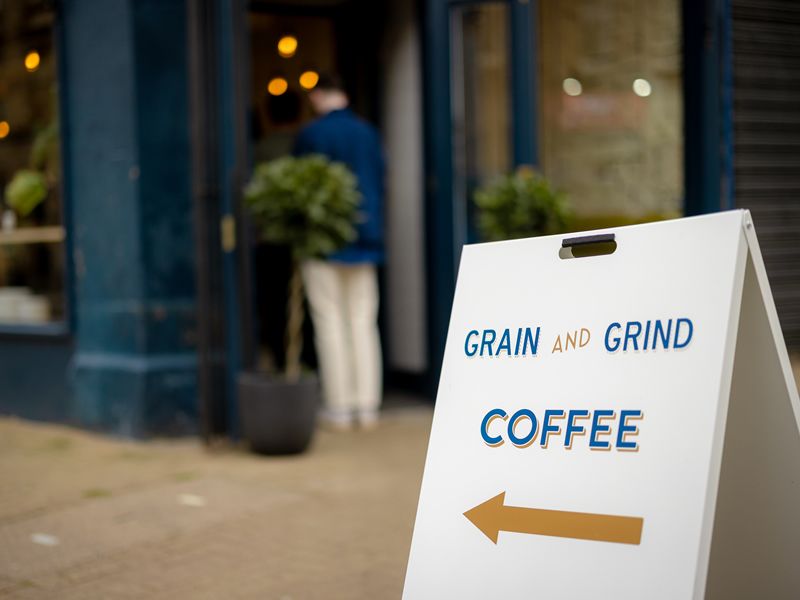 Marking their foray into the west of the city, Grain and Grind’s West End store has everything a coffee-lover needs, 7 days a week - from freshly roasted coffee, plenty of brownies and bakes, sandwiches and a dog-friendly, welcoming ethos. The store’s official opening night included a coffee masterclass, with Grain and Grind’s co-owner Matthew Mustard teaching guests how to perfect their very own latte art.

With five out of six of their Glasgow locations in the city’s Southside, the West End cafe’s opening on Old Dumbarton Road will bring the brand’s high-quality coffee to a new audience, just a stone’s throw from Kelvingrove Art Museum and the busy Finnieston strip.

Co-owner and business founder, Matthew Mustard said: “We’re delighted to officially launch our latest Scottish store, marking a new era for us in Glasgow’s West End. Our small business has truly thrived in the city’s Southside, and we thought it was about time we gave the good people of the West End a taste of our artisan roasts!

“We opened our doors in Battlefield in 2018, never expecting that one day we would operate seven stores in Glasgow and Inverness and that’s all down to our loyal customers. We’ve been so supported in the Southside with our five stores and we hope to bring a welcoming, friendly neighbourhood cafe vibe to our West End store and of course - top notch coffee.”

The bright, modern space seats 45 customers with the potential for outdoor seating in summer. The perfect spot to grab a coffee with friends before a stroll through Kelvingrove Park or to catch up on emails, Grain and Grind’s high-quality, Scottish roasted coffee will keep you going.

With their range of stores offering everything from freshly baked bread, to sausage rolls and pies, plus the very best coffee, Grain and Grind are one of the city’s most beloved, homegrown chains. Passionate about supporting local businesses like themselves, Grain and Grind promise that anything they don’t make themselves will be locally sourced.

Maintaining their small business ethos, Grain and Grind first installed a roaster in their Battlefield shop back in 2018, before growing the business so much that they moved their roastery to a larger location in Inverness. Their coffee offering includes over 20 roasts, each one carefully selected by Grain and Grind’s resident roaster John, who uses traditional roasting methods to perfect their signature flavours.

With their very own roastery serving their seven stores, six in Glasgow and one in Inverness, as well as a wholesale bean provider for businesses across Scotland, Grain and Grind are Glasgow’s coffee connoisseurs.

To find out more about Grain and Grind visit www.grainandgrind.co.uk