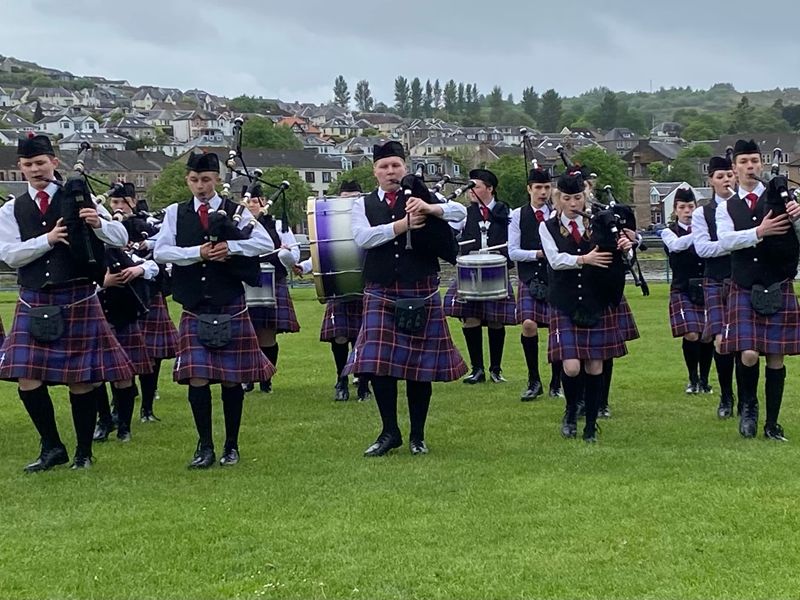 The 20-strong pipe band is set to perform as part of Piping Live! 2022 its first ever festival performance on Monday 8th August 2022 at 3pm on Buchanan Street, Glasgow.

They will then take part in the prestigious World Pipe Band Championships on 13th August, marking their first ever pipe band competition. They will be among nearly 150 bands made up of around 6000 pipers and drummers from all over the world taking part in the competition on the iconic Glasgow Green.

Ross Miller said: “I’m delighted to be leading The Isle of Arran Music School Pipe Band into their first ever festival appearance and competition season. Playing at the World Pipe Band Championships will be an incredible experience for the band and they’ve been working so hard to prepare. Performing at Piping Live! is also a fantastic opportunity, it will be the band’s first ever performance at a festival and it is such a great event to be a part of.”

Annie West, Youth Member of the Isle of Arran Music School Pipe Band said: “I’m really excited to perform at Piping Live! and take part in the World Pipe Band Championships - I have heard about both of these events for so long and I can’t believe I’m actually going to be playing at them! We have been practicing really hard and we’re really looking forward to it. I am feeling a bit nervous but excited too.”

Finlay MacDonald, Director of Piping at the National Piping Centre, said: “It’s great to have young pipers like the Isle of Arran Music School Pipe Band taking part in Piping Live! this year. The piping community is a fantastic one to be a part of and we hope they enjoy performing and experiencing everything Piping Live! has to offer.”

Kevin Reilly, Chairman of The Royal Scottish Pipe Band Association said: “One of the continuing pleasures of being involved in pipe bands and “The Worlds” is watching legacies develop in communities around the world. Many of the pipers and drummers that come to compete are starting out and will go on to play in bands for generations to come, some of them at the very highest levels. They will learn musical skills and lessons about teamwork and also build friendships that will last a lifetime and at the same time pass on the unique experiences of being in a pipe band.”

The Isle of Arran Music School Pipe Band is run by the Isle of Arran Music School charity and was originally funded for three years by the Scottish Schools Pipes and Drums Trust (SSPDT) with matched funding from a donor on the island. The project has since grown and there is now a competition band with 13 pipers, and a development band with eight pipers. A total of 43 pupils are currently learning pipes, and 34 are learning drums as part of the project. Funding has been provided by the Co-op Local Community Fund for uniforms, and The Arran Pipe Band have also contributed towards buying instruments. SSPDT are continuing to support the longevity of the project by funding on a reducing basis over the next 3 years.

Piping Live! is renowned as the world’s biggest piping festival and this year it celebrates its return to the full in-person programme for the first time since 2019. The festival will offer a blended showcase of in-person gigs and online events, so both local and international audiences can enjoy the array of world-class performances.

Now in its 19th year, the festival annually attracts over 30,000 attendees to Glasgow. The Piping Live! team, with thanks to their funding supporters Glasgow Life and EventScotland, have put together an eclectic and varied programme, including world-class performances, music sessions, recitals, talks, competitions, book launches, workshops and much more.

The World Pipe Band Championships will take place on Friday 12th and Saturday 13th August 2022 on Glasgow Green. The competition is the best place to experience live pipe-band music and the exceptional musical talent taking part. Thousands of pipers and drummers from around the world will battle it out to determine which band is the best of the best.

The Worlds, the first to go ahead since 2019, attracts international visitors to Glasgow. This year it will feature skilled and dedicated musicians from ten countries including Austria, Australia, Canada, Ireland, Israel, and the USA. For the first time, a band from Argentina is taking part. Spectators can expect to see a range of performers of all ages and abilities, from Novice and Juvenile Grades to the gripping drama of the elite Grade 1 competition.